Thailand - the land of smiles

Hope you're all okely dokely.

I'm in Thailand, feeling decidely under the weather with a stinking cold (where does that
phrase come from?!). Yuk. Where's Lemsip and blackcurrant Soothers when you need em?
I went to the pharmacy earlier for painkillers to try and dull this sinus headache.
Paracetamol was available but I asked if he had anything stronger, like co-codamol for
instance. He offered me Tramadol! I plumped for paracetamol. You can buy anything here.

Guess what, it's 1 month exactly to the day I fly home! Eeeeee! Travelling is an amazing
thing. So different from normal life, different from your average holiday. I feel like I've
acclimatised to life on the road, it's become the norm for me. Hearing lots of different
languages every day, even learning bits of different languages, never knowing who you
might meet and what you might see tomorrow, or the next day, or the day after that.
Unusual sights and wierd creepy crawlies have become daily occurances, and I'll miss
the laid-back craziness of Asia.

However, all the things you have to do differently from normal life start to take their toll
after a while. To give you an idea, here are the things I'm looking forward to having back
when I get home (I'm sure all you travellers out there will understand this!):

1. Clean toilets that flush without you having to pour in a pan of water after use. And
soap and loo roll everywhere!

2. Understanding what is being said to me, and being understood, without any effort on
either part.

4. Not having to work out where I'm going to sleep for the next few days/weeks/months.

5. Being able to pay for something by looking at the price and handing over the money,
instead of calculating the exchange rate, bartering and haggling for the actual price (and
then someone still trying to rip me off by short-changing me!).

6. Picking up the phone and having a chat, without first working out what time it is in
the UK, and/or arranging a slot with said chattee.

7. Cereal with chilled soya milk and fruit for brekky, in bed.

So, here's what I've been up to since I last wrote.

The bus from Siem Reap (Cambodia) to Bangkok was largely uneventful, with the
exception of a very loud explosion-like bang as I was queueing at the Thai border. I spent
the rest of the time in the queue working out where I ws going to run and hide in case
of a terrorist attack. Nothing else happened and everyone carried on as they were, so it
was probably just an old knackered lorry with a blow out!

I stayed in a hotel, same one as Flo, but this time on my own as she was meeting her
boyfriend here. After a couple of nights I knew I had to get back to the hostel environment.
You don't meet many people, living alone in a tiny single room! However, I did at Smile
Society, a hostel in Silom. In fact when I arrived I discovered a group of lovely people,
all single travellers of varying ages. We all gelled immediately and got on like the
proverbial house on fire for the next three days. The only thing I can liken it to is my first
year at uni, in P-block halls of residence (P-blockers, you know what I mean). After lots
of sightseeing, I was ready for some night time madness, and I certainly got it in Bangkok!
I'm not ashamed to say that I saw nothing of the tourist attractions during the day, but
instead simply went out and drank, danced and laughed until the sun came up! Of course
I'm paying for it now, you don't bounce back at 37 quite as easily as when you're 19!

After a few days I knew I should see something of Thailand. Aiming to avoid the touristy
beaches of south Thailand, I booked a night train to Chiang Mai, little town in the north west.
Myself and a French guy, Fred (I seem to attract French people!), went together and
stayed in the same hostel. We spent the next few days together. Chiang Mai is a nice
place, with lots of beautiful temples, markets, and artistic shops and cafes. It was Buddha
Day, a public holiday, the day after we arrived. There were lots of people visiting the
temples and the air felt happy and festive.
There was also a night market where I tried eating insects! First I had some little
grasshoppers, which were ok, sort of like little crisps. Then I tucked into a huge
beetle, which may have been an enormous cockroach, I'm not sure! Anyway, it was
gross. I only ate the head before giving up and throwing the whole lot in the bin.
It didn't help that Fred said they smelled like fish food, and although he photographed
me, he could barely look as I ate them. Suffice to say he didn't share my snack! I had
wanted to try tarantula, but the only place selling them was a transport cafe on the
road from Siem Reap, and they were covered in flies! Not wanting to have my head
stuck down the bog at any point in time, I didn't go for that.

One night we decided to see some Muay Thai boxing. It was mainly young lads, some
looked as young as ten, I felt bit sorry for them. Not sure how kosher it all was, although
I know they do start them young in boxing.
Out of the eight fights there was also a female fight, a comedy fight (six older lads blind-
folded and punching whatever they could, including the ref!) and finally what appeared
to be a real professional fight at the end, which was brutal and impressive. It finished
quickly when the loser was knocked out half way through the second round.

The next day we went to a Thai cookery school for a day of learning how to make
the truly wonderful food they cook here. Honestly, it's edible heaven, Thailand!
Not being much of a cook myself, I thought it would do me some good to learn some
skills, but I wasn't sure if I'd enjoy it. I find kitchens stressful places and as most of
you know, I'd always always rather be cooked for! Anyway, we had a brilliant day.
I enjoyed every minute of it, partly because we ate everything we cooked! We made
seven dishes and rolled out of the door at 4 o'clock! Hopefully I'll be able to recreate
some of them for you when I get home, with the help of the book they gave us at
the end of the day.

On my third day in Chiang Mai I joined a girl called Sarah, and a guide, for trekking
through the Thai jungle. We started in a Hmong village where we met some local
ladies making traditional clothing, then we hiked through forest, swam at a waterfall,
ate fried rice (our packed lunch) wearing bikinis in the pouring rain (!) and floated
down river on a big wooden raft, past elephants and more locals (now fully clothed!).
I really enjoyed it but could tell I was coming down with something and was glad to
get back to my aircon room with it's huge bed. The first two nights at the hostel had
been fairly sleepless as there was no aircon in the dorm, and even with the window
open and the fans on, it can't have been less than 30 degrees. I just laid there
covered in sweat listening to the noisy road outside. The only thing that got me through
was the hilarious Peter Kay biog I was reading! Before I went insane I had
to move rooms. I ended up paying more than four times the price but it was worth
it. The dorm was two pounds 70 a night, the private aircon room... eleven quid!
Obviously by our standards, both are incredibly good value, but when you're on a
travellers budget you need to get the cheapest available.

I'm now in a tiny town called Pai, where I have my own bungalow (albeit with
shared bathroom) for 3 pounds per night. It's in a gorgeous peaceful field right
next to the river with the mountains in the background. There's a shared kitchen
where everyone socialises, and a short walk to loads of cool bars and restaurants.
Unfortunately, due to my poorly state, I've seen little more than that. There are
some sights to visit, so as I'm starting to feel a tiny bit better, and I've recently
met back up with Carole (Borneo), I hope to maybe get to some of them
tomorrow. That's before the bus back to Chiang Mai on Tuesday, the night train
back to Bangkok that evening, and a flight to Hong Kong on Wednesday!
I'll be sad to leave Thailand as the people here are friendly as. Will deffo be
coming back here on holiday.

So, I'll have five days in HK before joining the China tour I've booked, on June
18th. I'm very excited about not having to work out where to go and where to
stay as it'll all be sorted by the the tour company. And for 18 days I'll be in a
group of the same 10 people. If the dynamics work well, it could be great fun,
so keeping my fingers crossed I get a good crowd. If I don't, it could be a long
two and a half weeks! After this I have 5 days in Beijing before flying home
on July 10th (arriving July 11th!). Yippedy doo da!

A lot of people have told me that t'internet can be elusive in China, so this might
be my last post before Beijing. If you don't hear that much from me in the
next month don't worry, I'll probably just be eating monkey brains or some
non-descript blob out of the sea, in the reputedly mad world that is my final
destination, China!!

Apologies again for the big blog. It won't be long before I'm home and I can
bore you in person instead, ha ha!!

Lots of love and hugs,

P.S. Thailand pics are up. Still no KL or Cambodia ones though. Will work on
that when I get back to Sheff. 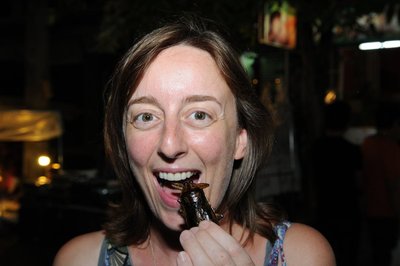 Posted by ExplorerMel 03:33 Archived in Thailand

Previous Next Table of contents

This blog requires you to be a logged in member of Travellerspoint to place comments.

If you aren't a member of Travellerspoint yet, you can join for free.